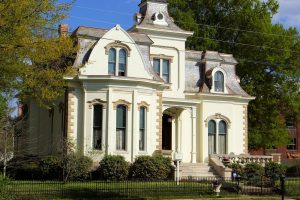 If you watch Lifetime TV, you’ve probably seen the show Designing Women. This show features strong Southern women with big attitudes and even bigger Southern pride. Georgia sentimentality and scenery was used as a backdrop for this 1980s comedy but the house featured in the show’s opening was actually in Little Rock.

The fictional home of Sugarbaker’s Design firm (with the fictional address of 1521 Sycamore in Atlanta, Georgia) is actually on Scott street in Little Rock. The house dates back to 1881 when Angelo Marre and his wife, Jennie Marre, built this elegant home on Scott Street, in the middle of one of the cities most fashionable neighborhoods (currently known as the historic Quapaw Quarter).

Even in the midst of all the other fine homes, the Marre house stood out. It featured an interesting combination of both the Italianate (Angelo Marre was from Italy) and Second Empire styles of architecture. This was a unique combination and made for a extravagant and beautiful house.

History of the Villa

With it’s winding walnut staircase and crystal chandeliers, the Villa served as home to the Marre’s for 7 years. Angelo died in 1889, a victim of blood poisoning at the age of 47. Jennie lived for another 16 years and remarried.

The home remained in the Marre family until 1905. Following Jennie Marre’s death, it was purchased by Edgar Burton Kinsworthy, a lawyer who had served as Attorney General of Arkansas. The Kinsworthys occupied the home for twenty-seven years and made many changes to update it to the style of the early 20th century.

The Villa has been home to several other families, all of whom remodeled it. The home was also sold and used as a nursing home, a dance studio, and a boarding house.

In 1964, with the house near ruin and set to be bulldozed, Little Rock furniture dealer James W. Strawn, Jr. stepped in to rescue the home. An extensive two-year rehabilitation returned the home to a turn-of-the-century appearance. Strawn did not restore it to its original design. He chose to leave some of the changes that different owners had contributed through the years. A melange of furnishings dating from the mid-19th century through the early 20th century contribute to the gracious atmosphere of this lost era.

Strawn donated the Villa to the Quapaw Quarter Association in 1979. In 2002, the Villa was purchased by a private owner, but it was sold again in 2012.  It was restored and is now an event space.

The Marres themselves have a history almost as interesting as the home they built. Jennie married her uncle James Brizzolara at the age of 17 and moved to Ft. Smith where James (a lawyer/politician) held office as mayor. She left him and a child after 6 years when she moved to Little Rock. It was rumored that she left her husband because she met Angelo and fell in love. She married Angelo (without divorcing James) soon after moving to Little Rock in a Catholic ceremony. She escaped charges by claiming the marriage to James was not legal because it was not performed in a Catholic Church.

Years before, Angelo was a Memphis police officer and killed a man in Tennessee during an argument. He resigned and became a saloon keeper in Tennessee. Before moving to Little Rock, he was arrested for possessing stolen goods and sentenced to 3 years in a Tennessee prison. He only served two years and received a Governor’s pardon.

Angelo then moved to Little Rock on an inheritance he received from a Memphis madame — “in remembrance for my and his love for each other” according to her will. Again he became a saloon keeper with his brother James. He made his fortune in this saloon. The building of his house was founded by money earned as a saloon keeper.

The Villa Marre is now available for events, and is a popular wedding destination.  More information on renting the Villa Marre.