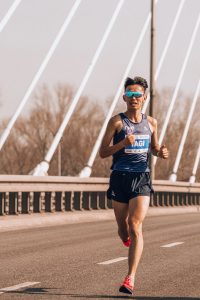 The Little Rock Marathon is a group of races in early March in Little Rock that consists of a marathon, a half marathon, a 5k, a 10k and a kids marathon. There used to be a marathon relay, but it was discontinued. Most of the races take place on Sunday, but the 5k takes place on Saturday.

The half and whole marathons generally sell out before race day, so if you’re planning on running, register for your spot early.

The course is very walker friendly with an eight hour course limit. That is one of the longest course limits for any race I know of.

The marathon is famous with runners for the large finisher’s medals. The Little Rock marathon has the largest medals of any race in the US. The 2012 marathon was the anniversary and it was the size and weight of a dinner plate. The medal for the half marathon is about the size of a normal finisher’s medal. That is one of the reasons the race sells out. People travel from all over to collect our unusual medal.

The course is really well designed and you get to see some of the major sights in Little Rock. I find myself giving tours as we run through the Quapaw Quarter, see the Arkansas State Capitol, the Clinton Presidential Center, the Governor’s Mansion, MacArthur Military Museum, Historic Little Rock Central High School and end and start in the Little Rock River Market District. It really is a great way to see the city.

Yes, what you’ve heard is true. We’re also famous for hills. The most famous hill is the legendary Kavanaugh hill. At around mile 13, runners go straight up (it seems) for a few miles before dropping right back down. It goes from about 300 feet elevation at mile 14 to about 500 feet in elevation at mile 16 and back to 300 feet at mile 18. There are a few other smaller hills, but this one is the killer. You always see runners falling back during these miles.

The Round and Back:

Another part of the course that I sometimes hear complaints about (and complain about myself) is the round and back at Rebsemen Park / Murry Park. Starting at around mile 18 there is a long stretch of fairly level street, but it’s probably the most boring part of the run. There are not many onlookers and you can clearly see the stretch of road in front of you. There’s not much to look at. At around mile 20 you turn around and repeat the same trail (on the opposite side of a green space, so there’s not much congestion). After the round and back is a small hill, but hey, it’s nothing after Kavanaugh.

Round and backs are common in marathons, so it’s not really a criticism of the course. It’s just a really boring stretch (but you’re almost done).

My favorite place to train is on the Arkansas River Trail. There are a total of 14 miles of connected trails. That’s perfect for most long runs.

The official Little Rock marathon training program meets weekly, and they do routes in Maumelle, around Lake Wilastein, and around the same areas as the actual course. You can see past routes on the Little Rock Road Runners site.

Hotels, Eating and Things to Do:

Some of my favorite restaurants for pre and post marathon meals are right in the River Market. Big Whiskey’s has a variety of food including burgers and some pasta. Iriana’s has awesome pizza (great for post-race especially). Gusano’s is another pizza place. Copper Grill has great burgers and salads. Dizzy’s Gypsy Bistro has an eclectic menu. For the diehards that believe in pasta before a race, Dizzy’s probably has the biggest selection of pasta downtown. There’s Juanita’s for Mexican food and beer. Vino’s has great beer and pizza too.