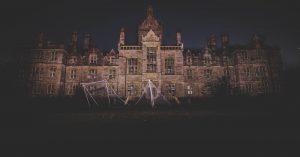 Murder, suicide, unexplained deaths:  You can find them all right in downtown Little Rock and Linda Howell knows exactly where.  She claims to know a little something extra about the who involved too. Haunted Tours of Little Rock brings you to some of Little Rock’s most haunted places to help you catch a glimpse of the past.  You might even get to communicate with a spirit.

Linda Howell bubbles with excitement as she tells tour groups about her ghostly acquaintances.  She met her first spirit while working at Curran Hall.  Since then she’s communicated with many more.  She’s also written a book, been on television and hung out with ghost hunters.  She says people call her the ghost lady.  The tour is worth it just to listen to her.

Linda claims spirits stick around because of attachments, and the living might not know exactly what those attachments are.  For some of our local spirits, it’s easy to guess.  For example, the Jones house was featured on SyFy’s Ghost Hunters.  This house in downtown Little Rock has been the location of several murders and odd deaths and is believed to be haunted by the spirits whose lives were taken there.

Haunted Tours of Little Rock brings you to this site and several others.  Linda comes prepared with EVP recordings, an EMF detector and dowsing rods (you might get to use those to make contact yourself).  She also encourages cameras and video recorders, so you get a chance to capture a spirit yourself.

The sites on the tour include the The MacArthur Museum (one of the most haunted places in the south), The Empress of Little Rock (a beautiful Victorian home turned bed and breakfast), Mt. Holly Cemetery (one of Arkansas’ oldest cemeteries), the Hangar House and Curran Hall (the Little Rock Visitor’s Center).  Linda remarks on several other historic homes in the Quapaw Quarter with sordid pasts.  You don’t go inside all of these buildings, but our tour got to go inside the Empress and see the top floor and visit the MacArthur Museum while looking for paranormal activity.

Most of the tour is on a bus or trolley, but there is a bit of walking, especially at the Empress.  You don’t have to go to the top of the Empress.  If you want to, it’s quite a few flights of stairs.  They didn’t make elevators in Victorian times.  It’s a view you don’t often get, even as a guest at the Empress.  The stairs to the top were worth it, ghosts or not.

I’m a skeptic.  This tour didn’t change that.  Many of the things, like ghost orbs and shadow figures, talked about on the tour can be explained.  Despite that, even I found it a fun tour, and it was very informative.

Linda is a great host and a very good storyteller.  Her knowledge of Arkansas history and respect for the buildings and people she talks about on her tour is evident.  The tour is a fun and interesting way to see the city.  It tells our history in a way I hadn’t thought about telling it.  Even if you roll your eyes at the thought of orbs and dowsing rods, you’ll still have a great time if you’re able to suspend your skepticism enough to listen.

If you’re not a skeptic and do believe in such phenomena, Linda is knowledgeable about that world too.  She’s the one ghost hunters call when they wanted to know where to go.  She’d be able to answer any of your questions, though she admits she’s not a “ghost hunter.”  We had skeptics and believers in my group, and both were satisfied in the end.

The real question: Did my group see any ghosts?  I think that’s where the two types of people come into play.  Everyone in the group with a camera captured an orb, some were more ghostly than others.  Half of the group is convinced we saw the lady in black.