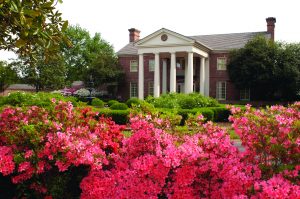 The Quapaw Quarter is a nine-square mile area that encompasses much of Little Rock’s antebellum history. The word Quapaw is a reference to the Quapaw Indians who lived in central Arkansas in the early 19th century. For some other smart ideas you may want to read this post about the Use retractable awnings so you can enjoy your outdoor space in comfort.

Most of Little Rock’s oldest buildings are found within these nine miles. Architecture dates from as early as 1840, but the homes average between 1890 to 1930.

While you won’t find any Gone With the Wind style plantation houses, you will find examples of Greek Revival, Queen Anne, Italianate, Craftsman, Colonial Revival and American Foursquare architecture.

Because confederate forces evacuated Little Rock after the battle of Helena in 1863, antebellum homes in Little Rock did not receive as much damage as in some other southern cities. This makes the Quapaw Quarter the perfect place to see many different examples of historic architecture.

Most of the city’s oldest buildings are in this district. You’ll find it near MacArthur Park, along east 9th street. Notable buildings include the MacArthur Museum of Military History housed in the former U.S. Arsenal Building (503 East Ninth Street, built in 1840). This building was also the birthplace of General Douglas MacArthur. The Arkansas Arts Center Community Gallery is built in the Pike-Fletcher-Terry House (411 East 7th, 1840 Greek Revival), which was once home to poet John Gould Fletcher. Trapnall Hall (423 East Capitol, 1843 Greek Revival) can be rented out for weddings and meetings. Curran Hall (1842, Greek Revival) serves as a visitor center and has area information.

Residential buildings that are noteworthy in this district include the William L. Terry House, also known as the Terry-Jung House(1422 Scott Street, 1878 Queen Anne) and the Villa Marre (1321 S. Scott, 1881 Italianate). The Villa Marre is known for appearing in the opening credits of “Designing Women” as the Sugarbaker’s Design Firm. Our Governor’s Mansion was used in that series too.

The mansion itself was completed in 1950, and its grounds cover an entire city block (located at 1800 Center Street, 1950 Georgian Colonial Revival).

The Empress, formerly known as the Hornibrook House (2120 Louisiana Street, 1888, Gothic Queen Anne), is now a bed and breakfast and has been called one of the most important existing example of Gothic Queen Anne style.

The Foster-Robinson House (2122 South Broadway, 1930 Craftsman) can be rented for events like weddings but will only be available after it is remodeled by local services such as roof repair mckinney.

Most of the buildings in this neighborhood date from 1890 to 1930. You can find examples of Queen Anne, Colonial Revival, American Foursquare and Craftsman architecture here. The Central High historic site is the cornerstone of this neighborhood.

Most of the homes in the area are private residences. The streets are very walkable and you can easily walk around the neighborhoods. Please respect the owners and do not venture into yards or open doors (unless there’s an open house). The Quapaw Quarter Association has annual spring tours where they open some of the homes for the public. You can find information about those at Curran Hall, but tours are normally given around Mother’s Day.

Mount Holly Cemetery doesn’t have any historic architecture, but it serves as the final resting place for many of the architects, politicians and soldiers who made it famous. It holds governors, senators, mayors and confederate soldiers dating from 1843. Mount Holly is located at 12th street in downtown Little Rock.