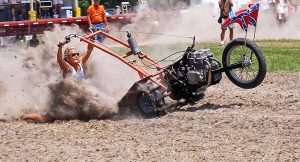 Purple hull peas are a southern tradition.  They are a “cowpea” because they used to be considered animal forage, but poor southerners (and specifically slaves) used to cook them up because they were cheap, easy to store and easy to grow.  Cow peas and salted pork kept many southern families alive during the winter.  They just happen to complement each other perfectly.  More on southern field pea traditions.

A purple hull pea tastes a little creamier and sweeter than black-eyed peas, but they are very similar.

The small town of Emerson, AR celebrates the purple hull pea every year.  It started in 1990, and has been featured in best festival round-ups.  It won the Arkansas festival of the year in 2002.  Like most local festivals, it has pageants, a craft market, vendors, entertainment, craft shows and even a cook-off (purple hull peas, of course).  Unlike most local festivals, it has the world championship rotary tiller race.

Yup, you read that right: a rotary tiller race.

If you’re from Arkansas, you probably know what a rotary tiller is.  Rotary tillers are machines that are pushed to pierce the soil with the rotary motion of disks or teeth.  They are  used to cultivate the land before you plant.

The race has people of all ages (there are different divisions) pushing these machines down a 200 foot track of land.  These aren’t all ordinary tillers though.  Many have been souped up, and people take the race very seriously.  There’s a little clip on YouTube of the shenanigans.

They are so serious, the race actually has two pages of rules.  The rules include that all racers must wear shoes.  There is no riding of the tiller (you have to push them).  You can’t strike barriers between the lines.  You can even have a pit crew.

The modified tillers must be built on a tiller frame and run through a tiller gear box, but the times, motor and throttle can be modified.  The max horsepower allowed is 50.  A 50 horsepower tiller is really moving some land.

The Purple Hull Pea Fest is held every year in June, usually the last weekend.

Emerson, Arkansas is in Southwest Arkansas, near Magnolia and six miles from Louisiana.  It’s population is only 368.  According to the United States Census Bureau, the town has a total area of 1 square mile.   You would probably miss it if it weren’t for the festival.  Being so small, it’s hard to miss the festival.  It’s on the grounds of Emerson High School (400 Church St, Emerson, AR 71740).