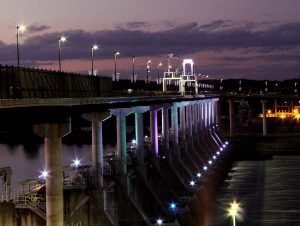 The Big Dam Bridge is the longest bridge in the United States that was built for pedestrian traffic and is part of the Arkansas River Trail. It’s also the only bridge built into a dam (as opposed to on top of a dam). It’s a popular spot for walkers and cyclists in the state, and a popular spot to host 5k walks and bicycle events. Pets can walk too, but clean up after them.

The Big Dam Bridge is open 365 days a year and 24 hours a day unless otherwise announced.

The bridge is 4,226 long and connects to about 15 miles of trails in the cities of Little Rock and North Little Rock known as the Arkansas River Trail.

The monoliths in the plaza are actually parts of the dam that had to be cut out to make supports for the bridge.

The LED lighting display that occurs after dark gets more comments from out-of-towners than any other aspect of the bridge.

The lighting display won the Illumination Engineering Society of North America IIDA Award of Merit and is truly a sight to behold.

Out-of-towners always comment, sometimes rather smugly, on the name “Big Dam Bridge.” The bridge was given that nickname by Judge Buddy Villines. It’s also referred to as the “Buddy Bridge” or the “Buddy Villines bridge” because Judge Villines envisioned the bridge and got it built.

Villines says the name came about from stating the obvious fact that it was a big bridge over a dam, a play on the words “big damn bridge” and the marketability of the clever name.

Although a few have commented about the “redneck” name for the bridge, no one will ever forget it.

One of the most prominent features of the Little Rock skyline has always been the “six bridges” over the Arkansas River (photo of the six bridges from the Butler Center). The Clinton Presidential Center was designed to look like a bridge in reference to that skyline. Those six bridges are the Baring Cross Bridge, the Broadway Bridge, the Main Street Bridge, the Junction Bridge, the I-30 Bridge and Rock Island Bridge.

Another set of bridges is being designed to connect the parks along the Arkansas River and allow people to hike or bike from the Clinton center to Pinnacle Mountain and the Ouachita Trail. Four of those bridges are open: the Two Rivers Bridge, the Big Dam Bridge, The Junction Bridge and Clinton Presidential Park Bridge.