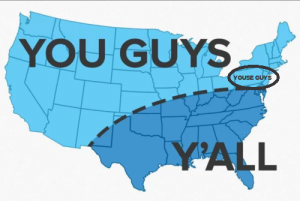 The Southern Slang Dictionary will help you avoid confusion if you are planning to visit the South. Use this slang dictionary to help you to understand what’s going on all over the South.

These are some of them most common (and not so common) Southern slang terms I hear in Arkansas.  Be sure to check the Arkansas pronunciation guide too.

Air-Up
Function: Verb
To pressurize or inflate. Example: “Air-up your car tires before you go on a long trip.”

A larking
Function: Verbal phrase
Originates from the word “lark” which means to engage in harmless fun or mischief. To go a larking means to play a prank or joke on someone.

Bowed Up
Function: Colloquialism
Marked by impatience or ill humor. Refers to the way a snake bows up his head before he strikes.

Cattywampus
Function: Adjective
Askew. Example: The storm knocked the boat cattywampus and it started to take on water.

Darn tootin’
Function: Colloquialism
For sure. Correct. “You’re darn tootin’, that is oil.”

Egg on
Function: Verbal phrase
To urge to do something. Example: “He only did it because the crowd egged him on.”

Fit As A Fiddle
Function: Colloquialism
In good shape, healthy.

Fixin’
Function: Verb
To get set : be on the verge Example: We’re fixin’ to leave soon.
Function: Noun
Customary accompaniments. Example: We had a turkey dinner with all the fixins.

Grits (Hominy Grits)
Function: Noun
Hominy or plain corn that’s been ground until it has the consistency of coarse sand. It’s used as a side dish, a breakfast cereal, or as an ingredient in baked goods.

Hankering
Etymology: probably from Flemish hankeren, frequentative of hangen to hang; akin to Old English hangian
Function: Noun
A strong or persistent desire or yearning — often used with for or after. Example: I have a hankering for fried okra. I’ve really been craving it.”

Heap
Function: Noun
A large quantity. Example: Billy got into a heap of trouble when he stole his dad’s car.

Hear tell
Function: Verbal phrase
A form of “hear it told.” Often conveys that the information was passed second hand. Example: “I hear tell that the new mini-mall is going up next month.”

Hominy
Pronunciation: ‘hä-m&-nE
Function: Noun
Etymology: Virginia Algonquian -homen, literally, that treated (in the way specified)
Date: 1629
Kernels of corn that have been soaked in a caustic solution (as of lye) and then washed to remove the hulls.

Hush puppies
Function: Noun
A Southern food made with cornmeal. They are small, round balls of cornbread and spices that are deep fried and often served with fish. These were originally fed to dogs to quiet their begging at the table.

June bug
Function: Noun
Date: 1829
Any of numerous rather large leaf-eating scarab beetles (subfamily Melolonthinae) that fly chiefly in late spring and have larvae that are white grubs which live in soil and feed chiefly on the roots of grasses and other plants — called also june beetles.

Laying out [all night]
Function: Verbal phrase
Staying out all night, often drinking of doing something illicit. Example: “I was laying out at the bar last night so I had a hangover.”

Lazy man’s load
Function: Colloquialism
A lazy man’s load is an unmanageably large load carried to avoid making more than one trip. This colloquial phrase is often used to indicate that someone is too lazy to think properly. Example: ‘Sam took a lazy man’s load of groceries out of the car and ended up spilling them all over the sidewalk.”

Like to
Function: Adverbial phrase
Almost. Example: “I like to pee my pants when that car hit me.”

Nearabout
Function: Adverb
Almost. Example: “I nearabout ran over that squirrel in the road.”

No ‘count
Function: Contraction
Of no account; good for nothing.

Nuss
Function: Verb
To nurse. Example: “She nussed the sick dog to bring it back to health.”

Okie or Sooner
Function: Noun
A resident or native of Oklahoma.

Okra
Function: Noun
A green, cylindrical vegetable that is often fried in the South.

Out of kilter
Function: Colloquialism
Not right. Out of sorts. Example: John was out of kilter for a while when he was relocated to New York.”

Particular
Function: Adjective
Concerned over or attentive to details : meticulous.

Piddlin’
Function: Adjective
Small or inferior. Example: “His work only gave him a piddlin’ 1% raise. Function: Adverb
Poorly. Example: “She felt piddlin’ so she didn’t go to school.”
Function: Verb
To waste time. Example: He spent all his time piddlin’ and never got anything done.”

Poke, Pokeweed, Poke Salad
Function: Noun
A type of salad often eaten in the South. Pokeweed can be toxic if not chosen and prepared properly.

Possum Pie
Function: Noun
A meat pie made from possum. This is not actually eaten in Arkansas to my knowledge!

Reckon
Function: Verb
Etymology: Middle English rekenen, from Old English -recenian (as in gerecenian to narrate, akin to Old English reccan
Date: 13th century
1 : Count Example: To reckon the days till Christmas 2 : to regard or think of as : Consider 3 : Think, suppose Example: “I reckon I’ve outlived my time — Ellen Glasgow”

Right
Function: Adjective
Very. Example: “You’re right near the street you want to be on.”

Ruther
Function: Verb
Form of rather.

Shuck
Function: Verb
To remove the outer covering of a nut, corn or shellfish.

Slap your pappy
Function: Colloquialism
To pat your stomach.

Tarred and Feathered
Refers to the practice of tarring and feathering people who committed small crimes such as distilling in colonial America (and in England). Today, it is often used to denote great suprise. Example: “I’ll be tarred and feathered, that dog just flew!”

Trotline
Function: Noun
A long line on which short lines are attached, each with a hook, for catching catfish. Some times mispronounced as trout line.

Varmint
Function: Noun
Etymology: alteration of vermin
Date: 1539
An animal considered a pest; specifically : one classed as vermin and unprotected by game law.

Y’all
Pronunciation: ‘yol
Function: Contraction
Ye all or you all.

Yankee
Function: Noun
Someone from the North.

Yonder
Function: adverb
Etymology: Middle English, from yond + -er (as in hither)
Date: 14th century
At or in that indicated more or less distant place usually within sight.

Your druthers is my ruthers
Function: Colloquialism
“Your preferences are mine,” “We agree.”