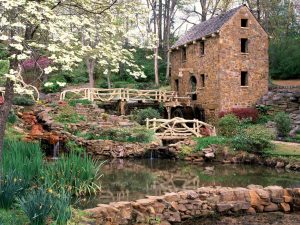 The Old Mill is the only remaining structure from the movie “Gone With the Wind.”  It was featured in the credits, and it looks much the same today.  It’s located what is currently North Little Rock, just a short drive from McCain mall.

The location doesn’t feature into the film at all, however.  According to the Arkansas Department of Tourism, Cary Bradburn with the North Little Rock History Commission offers this explanation  for why it was used in the film:

James P. Faucette, North Little Rock’s third mayor, lived in West Hollywood in southern California from 1917 to the mid-1930s. Faucette was a friend of Justin Matthews [builder of the mill] and the two men corresponded on a regular basis. However, I have found nothing concerning your question in the Faucette papers at the Butler Center. Most of the personal letters are from the teens. I suspect that the Faucette connection had something to do with it. So, I guess we still have a ‘history mystery’ but it just adds to the romance surrounding the mill.”

Google Map
The Old Mill is in the Lakewood area on Lakeshore drive. Take McCain Boulevard East and you’ll see Lakeshore which has signs pointing you to the Mill. Admission to the Mill is free and visitors may tour at their own pace. It is open from dawn until dusk.  This is a fairly safe neighborhood, but take the usual precautions if you come alone.

Arkansans use the Old Mill, also known as Pugh’s Old Mill, for many outdoor activities. On a nice spring day, you’re bound to find people picnicking, children laying in the grass or playing in the water and perhaps even weddings or photo shoots. Many people choose the Old Mill as a place to say their nuptials and many schools around North Little Rock have their school photos taken there. Who needs a fake backdrop when you have true Southern heritage behind you?  For weddings, call 501-791-8537.

Guided 30 minute tours are available for groups of 10 or more people, with advance reservations and are conducted by trained volunteers by calling 501-758-1424.

The Old Mill is not actually as old as it appears. In 1933, Justin Matthews contracted for the construction of a replica of an old-water-powered grist mill. He did not set out to copy any preexisting mill, but instead chose to design something that would fit with the contour of the area. He wanted the mill to appear as if it belonged in Arkansas and had been here since the 1800s. The Mill is intended to appear neglected, just as old mills that were in service in the early 1800’s had become by the 1930’s.

Even though the park looks natural, and like it was constructed with vines and bark, most of the decorations are concrete.  The park is decorated with sculptures of toadstools, tree stumps, and a tree branch-entwined bridge that connects the mill to the rest of the park. Senor Dionico Rodriguez, a sculptor and artist of Mexico City, was responsible for all the details of each piece of concrete work made to represent wood, iron or stone, as well as the designing of the foot bridges and rustic seats. During the summer of 1991, Rodriguez’s work at the Old Mill was renovated by the great-nephew of the original artist, Carlos Cortes.

The Old Mill was nationally recognized in 1986 by being placed on the National Register of Historic Places.