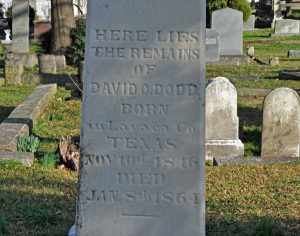 Where in Arkansas can you walk among senators, Confederate Generals and governors? Mount Holly Cemetery, of course. That is, if you don’t mind a few ghost stories. Mount Holly Cemetery is the most historically significant cemetery in Arkansas. It is the final resting place of many or Arkansas’ early leaders.

The cemetery is the final resting place of executed 17-year-old Confederate spy, David O. Dodd, as well as five Confederate generals and countless Confederate soldiers. Dodd is the most famous of the Civil War causalities resting there. He was arrested at the Ten Mile House near Little Rock and sentenced to hang by Union occupation forces after a brief trial. Dodd was called “the boy hero of the Confederacy” and a grave marker calls him “boy martyr.”

Also buried there are 10 former Arkansas governors, 6 United States senators, 14 Arkansas Supreme Court justices and 21 mayors of the city. You can also find the graves of Sanford C. Faulkner – the original “Arkansas Traveler,” William E. Woodruff – the founder of the Arkansas Gazette, the wife of Cherokee chief John Ross and Pulitzer Prize winner John Gould Fletcher to name a few. Walking through the cemetery is like walking through history. Nearly every stone marks a little piece of history.

The art in the cemetery is almost as amazing as the people who have ended their lives there. Some of the stones date back to the 1800s. Since many mark the end of prominent lives, you can imagine that the artistry is magnificent. However, it’s equally interesting to see the plain stones and the epitaphs on them. Mount Holly has a little something for everyone.

Even those interested in the paranormal will have their fill at Mount Holly. Mount Holly is rumored to be a hotbed of paranormal activity. Visitors to the cemetery have reported that some of the statues move in front of them and photos were taken at the cemetery suggest the same. I’ve seen photos taken at the cemetery that have ghostly images of what looks like people dressed in period clothes (if you strain a little) and strange lights and apparitions in them. Some say they hear ghostly flute playing in the cemetery. People who live around the cemetery have reported finding pieces of graves or statues placed mysteriously in their lawns and it’s reported that trinkets mysteriously appear on graves. Can all this be explained by science? Maybe so. I dare you to go at night with your camera to find out! Around Halloween, you can take a ghost tour that will dare you to do the same.  Night is the best time to see the ghostly apparitions and lights although they can be seen during the day too (on and off camera).

Mount Holly is open to the public and located on 12th street in downtown Little Rock. As Benjamin Franklin once said, “Fear not death, for the sooner we die, the longer we shall be immortal” and these Arkansas greats surely are immortal.