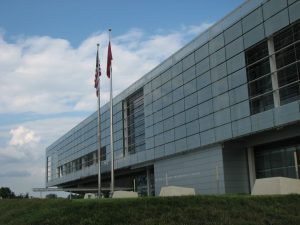 The Clinton Presidential Center and Library is more than just a library.  Presidential libraries do contain the papers, records and other historical materials of U.S. Presidents, they also offer many other attractions.

Every president since Herbert Hoover has a presidential library with a museum and an active series of public programs.

The Bill Clinton Presidential Center sits on 17 acres of land, not including the 30 acre Clinton Presidential Park.  The park includes a children’s play area, a fountain and an arboretum.  Also on campus is the Clinton School for Public Service, housed in a historic redbrick train station. Also nearby, though not connected with the library, is Heifer’s Global Village.

The History of Presidential Libraries.

The Architecture and Criticism

The library was constructed to appear as a bridge to the future based on Bill Clinton’s  nomination acceptance speech:

So tonight, let us resolve to build that bridge to the 21st century, to meet our challenges and protect our values. Let us build a bridge to help our parents raise their children, to help young people and adults to get the education and training they need, to make our streets safer, to help Americans succeed at home and at work, to break the cycle of poverty and dependence, to protect our environment for generations to come, and to maintain our world leadership for peace and freedom. Let us resolve to build that bridge.”

Critics of the architecture said the library looked like a “glorified mobile home” and gave away Clinton’s hillbilly heritage  Clinton met the remarks with humor and remarked, “Well, that’s about me, you know. I’m a little red and a little blue.”

What can I find in Clinton’s Library?

Clinton’s library contains many artifacts from his Presidency. The library has three levels and a basement. The main exhibits are on levels 2 and 3.

Level 2 (also known as the main level) has a timeline of Clinton’s career. Visitors can walk through and read about his presidency and see some artifacts from it. This level also has “policy alcoves” with artifacts and information about various aspects of his Presidency like education, environment, economy and more. There are a total of 16 alcoves. Another interesting exhibit on this level is the collection of letters to the President and First Lady from celebrities and world leaders. Among letters are letters from Mr. Rogers, Elton John and JFK Jr. Arsenio Hall also sent a letter to the President. An appearance on Arsenio made a big difference in Clinton’s first campaign. Some of the gifts the Clinton’s received while in office are also on display.

The second level has a changing exhibit area which features a different exhibit about once a quarter. These are usually unrelated to Bill Clinton’s presidency, but are of general interest.

The second level also contains a model of the oval office that the guides are eager to point out was partly arranged by Clinton himself for authenticity.  The photographs on the desk and the books on the back shelf are authentic but the rest of the office is a reproduction.

The restaurant Forty Two can be found on the basement level of the library. Forty Two has sandwiches and deli style items along with some more interesting dishes.  Forty Two has a great atmosphere and great food.  The prices range from $8-10 for entrees.

The cafe and a special events room can be rented.  The cafe also caters.

There is also a gift shop on site with some fun Clinton and general Arkansas memorabilia.

Where is the library?

The library is at 1200 President Clinton Avenue, which is very close to the River Market Area.

Parking is free. Spaces are available for tour buses and recreational vehicles.

The Clinton Library has several free admission days. Presidents’ Day, the Fourth of July and the Saturday before Bill Clinton’s birthday (November 18) are free to everyone.  On Veteran’s Day, all active and retired military and their families are admitted free.

Bags and persons will be searched before admission.

Can I take photographs?